This is 6th post in a series about building an AeroQuad open source quadcopter, and it’s long overdue, considering that my quad has been in a flying state for almost a month.

In my last post, I summed up the things I still needed to do to get there:

So, the 3 motor-side wires on each ESC were extended using 14AWG silicone wire. Those wires run through the carbon fibre arms of the Talon V2 frame: 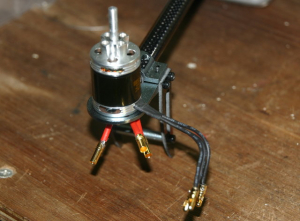 The connectors on the motors and on the wires just click together, and they are isolated with shrink wrap. However, this cannot be done at this stage, because the spinning direction of the motors has yet to be determined. The motors are first wired randomly, and later, when a motor turns out to spin in the wrong direction, two of the wires have to be switched. This procedure is part of the calibration, which I am (most conveniently) not going to cover in this post.

For the extra level, I bought some more materials: 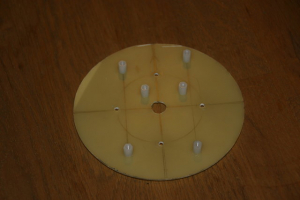 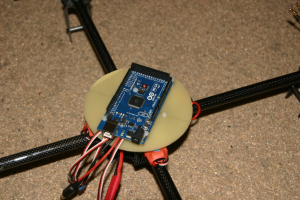 It is important to note which is the front side of the quad (see the small pencil-drawn arrow on the mounting plate). The flight controller has to be mounted with one specific side pointing forward. I will be flying in Quad-X mode, meaning that the front of the quad is in the middle between two arms. The mounting holes in the plate are positioned exactly right for this configuration.

Here’s an idea of how it looks when everything is stacked together: 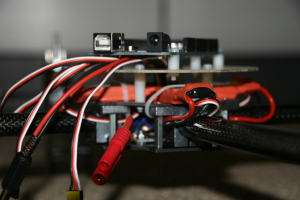 The AeroQuad shield is missing from this picture, as is one other important part: the 2.4 Ghz receiver! 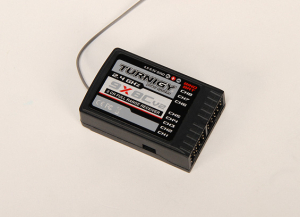 I actually forgot about the receiver when I placed my last order with Hobbyking, and this meant I had no wires to hook the receiver up to the flight controller. Add to your shopping list:

Now, putting it all together is not very difficult anymore. The things I’m going to skip for now are:

Fast forward to the (more or less) finished product: 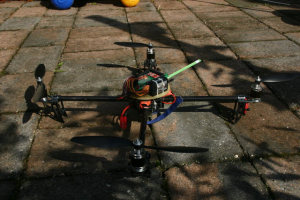 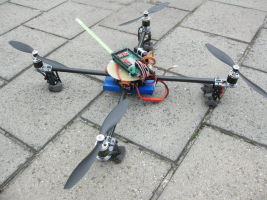