After another year of slow development, Trackserver v4.0 was released today. If you don’t know what trackserver is, you can read about it on its dedicated page on this website.

I will update this post later with some more in-depth information and some nice screenshots. For now, I’m afraid I will have to keep it down to the changelog, which you can find below. Where v3.0 was a big update on the front-end, the changes in v4.0 are much more in the back-end. Most of the work has been done in the WordPress admin, a little work was done in client / protocol support for live tracking (geofencing!) and a few minor improvements on the presentation side. Only one new shortcode parameter this time, and no real changes to existing ones.

Version 4.0 is the first version to feature a tangible contribution from someone other than myself. Thanks must go to Dainius Kaupaitis, who contributed a Lithuanian translation.

Here are the changes, plain and simple: 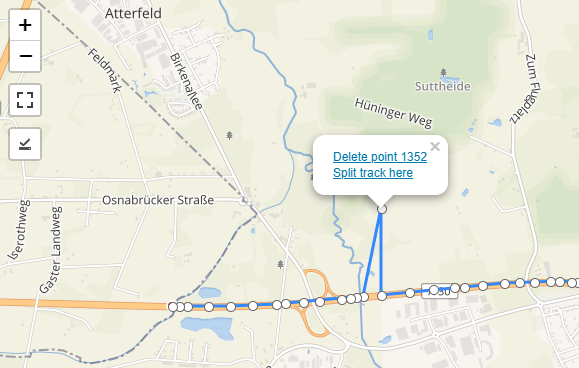 Almost 14 months after the last big update, Trackserver v3.0 was released today. Since this is quite a big update, with lots of new features and improvements mainly on the presentation side, I thought I’d spend another blog post on it. If you don’t know what Trackserver is, you can read my initial blog post on it, and the update on v2.0 in December 2015. I will present some demos at the end of this post to give you a better idea.

First I will sum up some of the smaller changes. I will get to the big ones later.

Perhaps the biggest change is in the communication between the server side of Trackserver and the JavaScript that is responsible for creating the maps and drawing the tracks. Trackserver has since long distinguished between 3 basic types of tracks:

It was possible to mix these types, but in very limited ways. On top of that, each track, regardless of the type, was downloaded separately, one HTTP request per track. For maps with a lot of tracks, that wasn’t the best design, performance-wise. Both these shortcomings led to a new scheme for getting tracks from Trackserver.

Don’t forget: if you want to display GPX or KML files, you are bound to the limitations of CORS.

The [tsmap] shortcode gained some attributes for more control over the maps and how the tracks are displayed:

Trackserver already had some options to style your tracks: markers, color, weight, opacity and (since v2.2) points. However, these style options were per-map, rather than per-track. You would have all markers, or no markers at all. You could have really fat, purple lines for your tracks, but you would have them for all tracks.

All the styling options now support comma-separated lists of values. Multiple values in such a list will be applied to the specified tracks in order. For example:

will draw two tracks on the map: ID 1 in a really thin red line and ID 2 in a collection of purpleish points. I think you get the idea. If less values than tracks are given, the last value is applied to all remaining tracks, so track=1,2,3,4,5 color=red,blue will give you one red track (ID 1) and four blue ones (IDs 2-5).

There is one thing to keep in mind though, when you specify multiple values. While track order will be preserved within each track type, different track types are evaluated in a specific order, and styling values are applied in that order too. The order is:

In this case, the GPX track will be yellow, Jim’s live track will be green and tracks 10 and 99 will be red and blue respectively.

Trackserver has a new shortcode: [tslink], perhaps not the most intuitive name. This shortcode produces a link, with which the specified tracks can be downloaded as a GPX file. Other formats are on the horizon, please open a feature request issue on Github if you need a specific format. [tslink] is used almost the same as [tsmap], except that it lacks all the styling attributes.

will give you a link to a dynamically generated GPX file, containing tracks with IDs 12, 87 and 525, as well as Patrick’s latest track. There is also a class attribute that can be used for styling the resulting <a> element, and a format attribute whose only valid value is ‘gpx’ at this time.

What do you think?

If you use Trackserver, I would LOVE to know about it!! If you have problems with it, please open a support request or an issue in Github. If you are happy with it, please leave a review. And if you absolutely love it, please consider a small donation to support development. It will be much appreciated!

A bigger collection of demos can be found on this dedicated demo page, but here are just a couple of them to give you an idea:

Whenever I leave the house to do something interesting (riding my motorcycle, snowboarding, hiking) I take my Garmin Zumo 550 with me, to log my tracks if not for anything else.
The great thing about a device like the Zumo is, that it always logs the GPS location, there is no need to turn that on specifically, so you can’t forget it either. So, if you like taking photographs, and you make sure you have a GPS log, you can easily tag your photos with a location, for example with my Taggert software.

Unfortunately, the Zumo suffers from some annoying bugs, that make using its track logs a little less efficient. As you can read on the linked page, the Zumo creates track archives in GPX files, but sometimes it duplicates data and sometimes it partially duplicates data. Sometimes it duplicates data across different files, but in the worst case, it happens that data is partially duplicated within the same file. This means that you end up with a GPX file, that contains two equally named tracks, one of which is complete and the other one is not. Nice, huh?

The amount of tracks in a single archive file and the timespan they were recorded in are not really predictable. I guess it mostly depends on the total number of track points in all tracks together. For my own purposes, it would be most convenient to have all tracks from a single day together in a single file. And of course, there should be no duplicate tracks and the tracks that remain should be the complete ones.

To post-process the Zumo’s track logs, I created some Python scripts. The README on Github pretty much explains what they do in detail, but in short, they do what is necessary to get what I want:

The scripts are written in -and tested on- Python 2.7 on Linux, but since they don’t have any external dependencies, I don’t see why they shouldn’t work on Windows or other platforms as well. They are released under the Apache 2.0 license. Please use them as you see fit.